Warriors make up the Regent's forces in Sengoku Asuka ZERO.

Each warrior is of a specific element: fire, water, wood, light, or dark. 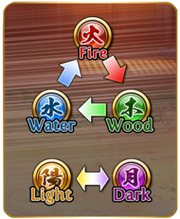 Fire, water, and wood form a triad where:

Light and dark are a simple opposing pair, where Light warriors deal increased damage to Dark warriors and vice versa.

Each warrior is limited to equipping weapons of a specific type:

Warriors gain experience through battles, and when sufficient experience is gained, their level increases, raising their HP, ATK, and DEF and, at certain levels, unlocking weapon and skill slots.

Warriors have a maximum level they can reach, though this can potentially raised through promotion.

The warrior's level also cannot exceed the player's Regent level, effectively capping her level at the lower of the regent level and the warrior's specific maximum.

Coins can be spent to raise a warrior's level via training through the warriors menu.

Some warriors can be promoted to higher ranks, up to rank 3, using Promotion Materials and Coins.

Any warrior who has been promoted at least rank 1 may participate in Dark General raids.

Ascension is unlocked at Regent level 55 and is added to the Promotion interface. It functions almost as another form of rank for warriors capable of ascension.

Warriors must be promoted to maximum rank before they can ascend. Similar to promotion, ascension requires Ascension materials, which are obtained through the warrior's Realm of Souls.

There are four stages of ascension which provide the following benefits:

To unlock a Realm of Souls:

You must reach Regent Level 55 An eligible warrior must be Promoted to her final Promotion stage In the Field of Souls, all enemies have resistances to, or complete protection from, certain weapon types and/or elements. You can confirm these special defences before the battle starts. 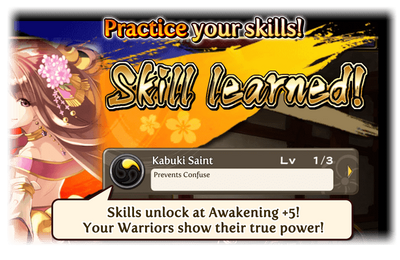 A warrior's awakening level is increased whenever the player "recruits" a duplicate of that warrior and or uses a Sake based on that characters star level.

This can provide the following benefits:

Awakening skills are unlocked and increase in level at certain awakening levels depending on the warrior's rarity:

A warrior's maximum awakening level depends on their rarity:

At the end of Book 1, Chapter 1, the Regent chooses one among the Aoba's warriors to serve as his or her Envoy. This warrior is sent out whenever a player answers an aid request, and that warrior's portrait also becomes the player's portrait.