Edit
This article is a stub. You can help Sengoku Asuka ZERO Wiki by expanding it. 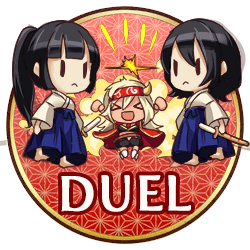 The Duel Area of Sengoku Asuka ZERO is where Regent vs Regent happens. Every Regent has only three Duel chances per day and refreshes at 11:00 a.m AEST.

In Duels, you choose from a list of Regents on a ranking ladder that are available to fight. After selection, you will then chose 5 warriors of your roster to pit against the chosen Regent's defense team in normal combat. In addition, you may choose a defense team. This team represents your team that other Regents will fight if they choose to duel you.

Keep in mind, all teams will only have weapons that are CURRENTLY equipped to them. There are no option to auto equip and thus prepare carefully before you engage in combat.

Combat differs from normal stage combat in that everyone in your team starts off the combat with their EX half filled allowing for EX to happen early than normal. In addition the time limit for the combat is reduced to 2 minutes. The combat ends when one team is defeated.

If you win the combat you exchange positions. There are cases in which if an opponent fights you at the same time as you are fighting someone else, the exchange of position is then based on which combat has ended first.

Rewards and results are tallied daily at 7:00 a.m AEST. Rewards are tiered and based on your ranking. These rewards are sent to your Presents tab.

Lastly, all defenders of duels receive a 50 Duel Coin

reward for defense in duel regardless of outcome. Duel coins

are currency that you are able to spend in the Trader menu to exchange for great rewards including units, Patrol tickets, Skill books and other useful things.

Unlike raids and normal story battles, this mode cannot be restart-scum. If you close the program or close the app, it is registered as an immediate loss.